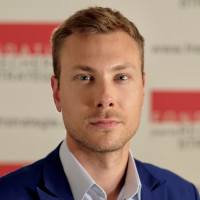 Antoine Bondaz is a Research Fellow at the Foundation for Strategic Research and heads the FRS-KF Korea Programme on Security and Diplomacy. His research focuses mainly on the foreign and security policy of China and the two Koreas, and strategic issues in East Asia.

Antoine Bondaz teaches at Sciences Po Paris, notably at the School of Public Affairs ("Europe-Asia relations in the Trump era") and at the Europe-Asia campus ("China's foreign and security policy" and "Demystifying North Korea"). He regularly works with Paris 1 - Sorbonne, the Ecole de guerre or the Institut des Hautes Etudes de la Défense Nationale (IHEDN). He is A scientific advisor to the East Asia Programme of the Geopolitical Studies Group (GEG) founded at the Ecole Normale Supérieure Ulm.

Antoine Bondaz was Special Adviser to the President of the Delegation for Relations with the Korean Peninsula of the European Parliament during the 8th Parliament. He previously worked as a Researcher at Asia Centre where he participated in the China Observatory for the Ministry of Defence, co-directed the journal Korea Analysis, and wrote regularly for the journal China Analysis. Previously an Invited Visiting Fellow at Korea University's IIRI Center in 2012, he was a Visiting Scholar at the Carnegie Endowment of International Peace, within the Carnegie-Tsinghua Center for Global Policy in Beijing, in 2013. In 2017, he participated in the Korea Foundation and Chatham House Europe-Korea Young Policy Experts Forum, the Japanese Ministry of Foreign Affairs European Experts Invitation Programme, and was selected during the Young Professional Day NATO-ACT/IISS to attend the NATO Transformation Seminar. In 2016, he participated in the China-US-Europe Young Scholars Program of the CCCWS and the China-US-Europe Young Leaders Program of the CAFIU.

Antoine Bondaz holds a Phd in Political Science from Sciences Po. He wrote his thesis entitled "From Insecurity to Stability: China's Korean Politics from 2009 to 2014" (very honourable mention with the jury's congratulations) under the supervision of Professor François Godement. He presented an original reflection on China's regional strategy by analysing Chinese perceptions of their environment, and developed the concepts of "insecurity complex" and "peripheral stability strategy". He has conducted research in China (Tsinghua University), South Korea (Korea University) and North Korea (Institute of Disarmament and Peace), and has conducted more than 150 interviews with leading academics, experts and diplomats. He was a research grant recipient of the CNRS, funded by the Directorate General of Armaments and attached to the Centre d'Études et de Recherches Internationales de Sciences Po and the Institut de Recherches Stratégique de l'École Militaire. He previously studied at Sciences Po Bordeaux, National Sun Yat Sen University in Taiwan and Hankuk University of Foreign Studies in South Korea.

As part of his doctoral research, Antoine Bondaz has received various research prizes and was a laureate of the IHEDN for four consecutive years, and the Pierre Ledoux Foundation, under the auspices of the Fondation de France.