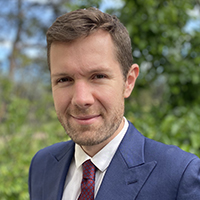 Paul Soyez was the Press Attaché of the Embassy in France in Australia between 2018 and 2021. Before this experience, he was a researcher and a lecturer at the University of Melbourne in Australia (2014-2018), specialized in Australia’s foreign policy in its region. Paul Soyez has also taught at Sciences Po Paris and at the Paris-Sorbonne University.

Paul Soyez has a PhD in International Relations jointly awarded by the University of Melbourne and Paris-Sorbonne University. His thesis, “France and Australia’s mutual empowerment”, focused on the deepening of the bilateral relationship between Paris and Canberra between 1985 and 2018. His PhD was directed by Professors John Langmore, Philomena Murray and Olivier Forcade. Paul Soyez is also “agrégé” in History.