A French version was published by Le Figaro on September 25, 2019.

With nearly 450 days without any nuclear and ballistic tests, the Korean peninsula has entered a new phase. 2018 was marked by North Korean diplomatic activism, initiated by the country's participation in the Pyeongchang Winter Olympics and symbolized by Kim Jong-un's meetings with Chinese, South Korean and, of course, American leaders.

Despite the absence of a detailed roadmap, the historic meeting in Singapore highlighted two opportunities. The first is related to the negotiation process. Direct negotiations are taking place for the first time at the highest level through summit diplomacy, and since, both sides have announced their agreement to pursue simultaneously and progressively all the commitments made in their joint declaration.

The second opportunity is related to these commitments. Kim Jong-un pledged to work towards the complete denuclearization of the Korean peninsula, and recalled in his speech on January 1, 2019, that his country will not make, test, use or proliferate nuclear weapons. Donald Trump committed to building new relationships between Washington and Pyongyang and promoting peace. His special envoy recalled that the President was "deeply and personally committed to putting a definitive end to 70 years of war and hostility".

Cautious optimism must prevail, however, as these opportunities still need to be given credibility. We must also guard against two illusions, as it would be naive to think that the North Korean crisis has been resolved, or even will be in the short term.

The nuclear illusion is to confuse the moratorium on testing with an end of the programs. We must be fully aware that North Korea's nuclear and ballistic capabilities, and therefore the threat they pose, continue to increase. The illusion of stability is to believe lasting peace can be achieved without concrete progress towards denuclearization. As the South Korean President recalled, denuclearization is "the absolute condition for peace".

Ahead of the summit, the main risk is that the American president will be satisfied with a shortterm staging without seeking a long-term solution to the problem. His bet could be that the new context, i.e. his unprecedented meetings with Kim Jong-un, softened rhetoric from Pyongyang, and a moratorium on testing, could enable him to oppose the tensions of 2017, wrongly described as the legacy of his predecessor, to a new peaceful era showcased as a personal success to his electorate, few months before the 2020 US elections. The main challenge is therefore to maintain a positive dynamic while being aware of the risk of an ad hoc political agreement that would only seem to resolve the North Korean crisis. The priority should be to institutionalize the current negotiation process and to give credibility to the commitments made by both sides.

The first objective should be to formalize the negotiation process and dialogue with North Korea. The opening of liaison offices in Washington and Pyongyang, already mentioned in the mid-1990s, would be a first step. Meanwhile, communication channels should be sustained at all levels. Third parties, such as Sweden, have and continue to play an important facilitating role.

The second objective should be to implement the North Korean regime's commitments to denuclearization as soon as possible by encouraging it to sign the Comprehensive Nuclear- Test-Ban Treaty (CTBT) and to accept the return of international inspectors to sites such as Yongbyon. This would help to progressively curb the nuclear and ballistic program while promoting a multilateral approach to a global proliferation crisis, a priority for Europeans The third objective should be to reduce the risk of accidental conflict in the peninsula by developing military confidence-building measures. The implementation of the inter-Korean military agreement of September 2018, the reformation of the Military Armistice Commission planned for 1953, or the continued return of the remains of foreign soldiers who died during the Korean War, like the 267 French, are all means of strengthening essential military interactions.

The fourth objective should be to apply the concept of human security to North Korea, as defined by the United Nations. A cross-cutting approach would improve the living conditions of North Koreans by considering socio-economic changes in the country. Facilitating the arrival of humanitarian aid, such as the exemptions recently obtained by France for the NGOs Première Urgence Internationale and Handicap International, is obviously a positive step. The two opportunities before us are historic but not sustainable in the long term. It is essential to make them a reality and to avoid a political staging that would only delay an enduring crisis. Antoine Bondaz, Ph.D., is a research fellow and the head for the FRS-KF Korea Program on Security and Diplomacy at the Fondation pour la Recherche Stratégique. 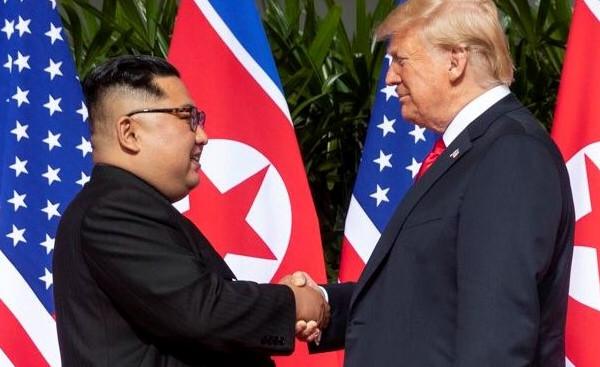 To guard against illusions and formalize commitments : what is at stake with the second US-DPRK summit