Curiously, the issue of missile identification has not caught the attention of observers. It was very quickly accepted that missiles of the Fateh- 313 type, a direct derivative of the Fateh-110, had been used against the el-Asad base. However, the assertion is worth discussing, especially when possible firing ranges are considered. On the other hand, while the use of Qiam-2s can be inferred from the study of the impacts, some experts have shed light on this missile’s potential use by analysing the booster debris. In this particular case, the combination of imagery analysis and weapon system expertise provides a high level of certainty with regard to the assessment of the missile used.

The idea that the strike originated in Kermanshah stems from the initial tweet from Fars (see part one), which mentions the Fateh-313. The distance from the base appears to be consistent with the missile's range. The association between Fateh-313 and Kermanshah was then tacitly accepted by observers, on the grounds that the 2017 and 2018 strikes originated from one of the identified bases in the area.

Nevertheless, the use of a different model of the Fateh family is a hypothesis that cannot be put aside. Indeed, although the range of the Fateh-313 is sufficient for the strike against el-Asad, the very high accuracy indicates the use of a terminal guidance system on the missile, a system that has not been confirmed as part of the Fateh-313. The strikes on the northern zone may have been carried out by a recent variant of the Fateh-313, the Fateh Mobin, unveiled by Iran in August 2018. This missile is described as a terminal-guided, probably electro-optical, high-precision missile that can dispense with satellite guidance in a jammed environment.

As the Mobin is the same size as the Fateh-313, maintaining the range and adding a terminal guidance system would require the reduction of the explosive charge. The Fateh Mobin could therefore have a relatively limited destructive capacity and could have been used against the el-Asad base.

Two of the known Fateh-type missile parking sites in the Kermanshah area are located 430 and 450 km from el-Asad, while the range of the Fateh-313 is estimated to be around 500 km. The deliberate choice to use a delivery vehicle at its maximum range is, however, highly unlikely from a military standpoint if systems of identical accuracy and longer range are available. This is due to the fact that use at full range tends to increase the risk of degrading accuracy, unless a satellite geolocation system is used throughout the missile's path. In view of the uncertainties associated with satellite geolocation, the range limit implies that the firing zone is closer, or that a longer-range missile has been used.

On the other hand, with certain limitations, the analysis of successive shots of radar satellite imagery allows the identification of unusual activity in an area, including as a result of vehicle movements. However, the example below, showing the analysis of the northern base of the Kermanshah area, shows an absence of activities between the 7th and 13th of January.

Coherence map (radar imagery) of the northern Kermanshah firing site, illustrating the absence of movement in the area during the strike period (firing range activity in 2017, inactivity in 2020) 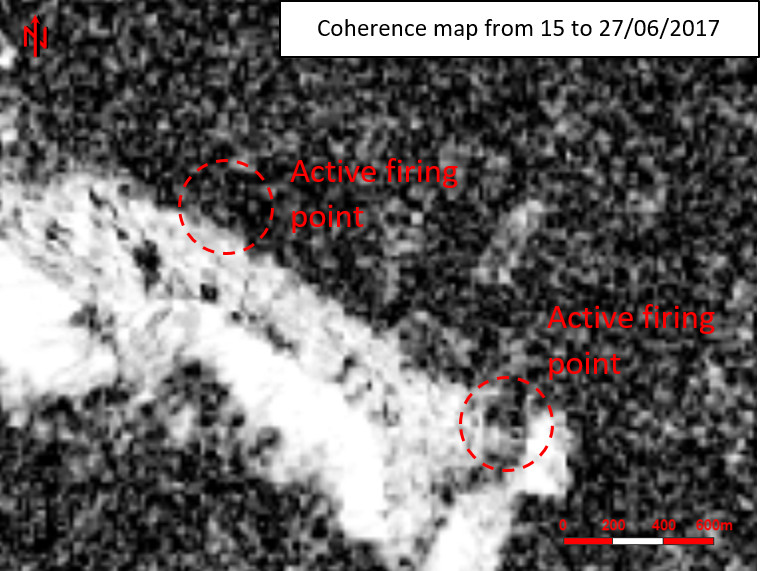 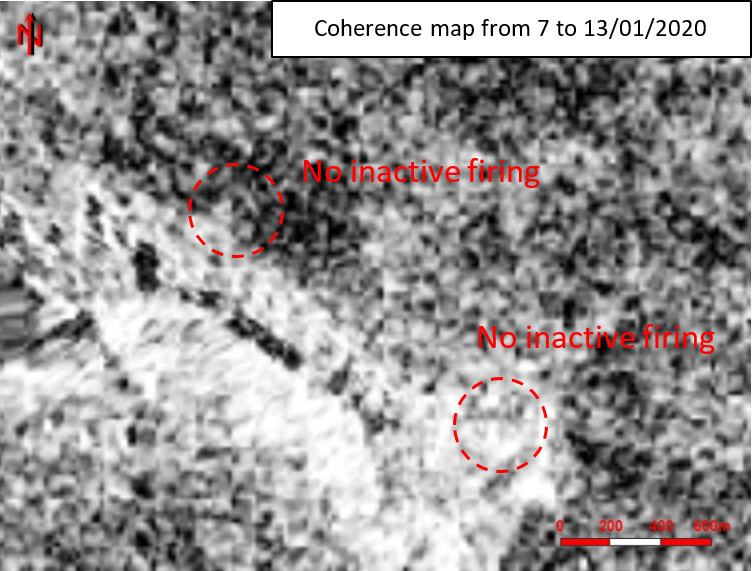 Although the missiles may have been fired from an unidentified base in Kermanshah or further to the west - and thus closer to the el-Asad base - the analysis of the impacts, particularly the direction of the blast effect, indicates a slightly different direction for the origin of the missiles. Rather, the axis of launch coincides with Khorramabad, the historic base where the first Shahab-3s were deployed by Iran, located 125 kilometres south-east of Kermanshah. Khorramabad could have been the firing base for Qiam-2s, being suitable for firing this type of missile.

Angle of arrival of the missile as a function of the direction of the blast, in the axis of the Khorramabad base 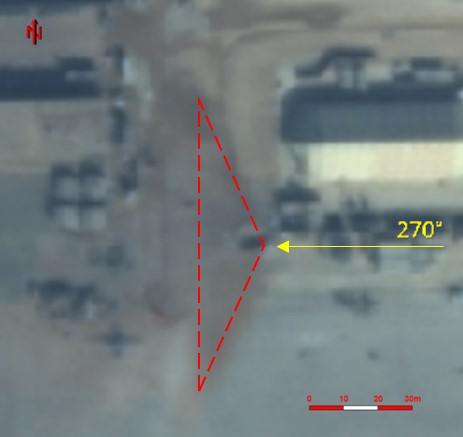 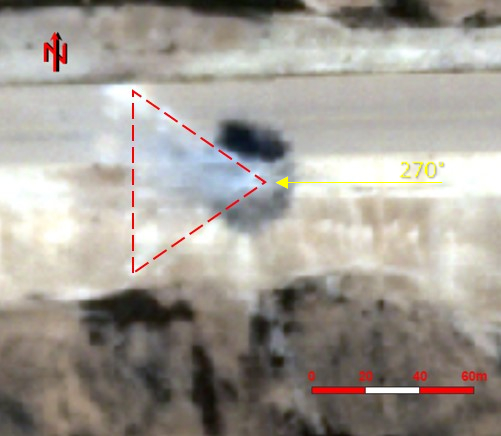 However, if Khorramabad is also the launch area for Fateh-type missiles, the Fateh-313 or the Fateh Mobin can no longer be potential candidates, as the base is located 540 kilometres from el-Asad, well beyond the 500-km range of the two missiles. It could therefore be a Zulfiqar type missile, a heavier model than the 313 or Mobin type systems, since it is approximately one metre longer and possibly slightly larger in diameter.

The possible use of Zulfiqar missiles, terminal-guided missiles with a range of 600 to 700 kilometres, was raised the day after the strike, before the hypothesis of the use of a Fateh-313 gained general acceptance. However, while Iran had specifically put forward this missile in previous strikes, no details were given by authorities. Why then propose the possible use of Zulfiqar, when the hypothesis of using a Fateh-313/Fateh Mobin remains perfectly acceptable as long as we accept that the missiles could have been launched from an unidentified firing site west of Kermanshah?

Zulfiqar type missile (booster and warhead, with part linked to the guidance and warhead)

One response lies in the fact that Iranian authorities may not wish to associate Zulfiqar with the strike due to the lack of destructive effects. The Zulfiqar, as well as its long-range evolution, the Dezful, are indeed the most modern components of Iran's precision strike systems. Unlike the Fateh 313 or the Fateh Mobin, these missiles, together with the Qiam-2, represent the keystone of the regional strike capability, particularly against the states of the southern Persian Gulf. The credibility of a missile does not, however, rest exclusively on accuracy but also on the possibility of achieving a military effect against relatively protected and hardened targets. While analysis of satellite imagery does not in any way allow us to confirm that Zulfiqar were used, it illustrates certain contradictions and raises some questions.

From this point of view, the case of Qiam is simpler to analyse. From the debris found around Hit, Ralf SavelsbergRalph Savelsberg, « Massive Improvement in Accuracy of Iran Missiles over Scud-B », Breaking Defense, January 15, 2020. identifies the missile used not as a Qiam but as a Qiam-2. The debris of the Qiam-2's booster can be recognised by the fins deployed at the base of the missile to stabilise the upward trajectory, absent on the Qiam and of a different size on the Shahab-2 (images below, taken from R. Savelsberg's analysis). Further analysis of the impacts and debris supports the operational nature of a Qiam with a manoeuvring head - designated Qiam-2 -, shown by Iran but whose exact status in the arsenal was unknown. 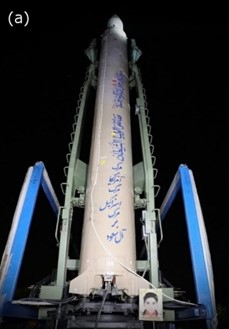 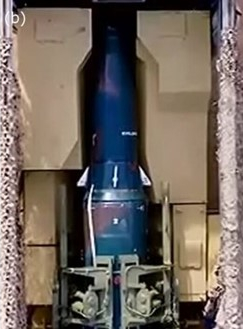 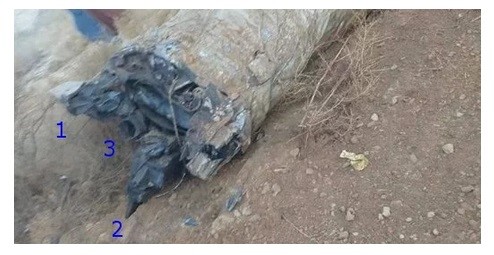 Identifying the operational character of Qiam-2 is important, as it shows that Iran has different options for implementing its precision strike strategy and that the possible inadequacy of one development path can be made up for by another. On the other hand, the demonstration of the Qiam-2's capability tends to show that the Emad, a manoeuvring warhead missile the range of which is between 1500 and 1700 km, represents a credible threat.

What lessons can be learned about Iran's operational capabilities after the 8th of January attack?

According to Amir Ali Hajizadeh, the commander of the aerospace forces of the Revolutionary Guards, the choice of el-Asad stems from the desire to punish the source of the targeted killings of Qassem Soleimani and Mehdi Al-Mouhandis.Press conference by General Amir Ali Hajizadeh, op. cit. (first part). American reports seem to show that Iran has not targeted or has not been able to identify and target the operational centre of UAV operations.The operators reported that they maintained operations for several minutes under fire and resumed their activities immediately after the strike was completed. Conversely, the two Qiam-2 strikes could indicate a willingness to ensure the complete destruction of critical support areas for UAV operations.

Overall, the analysis of the strikes establishes a clear link between Iranian intentions and targeted objectives. The analysis endorsed by a majority of experts, according to which Iran carried out a controlled strike aimed primarily at inflicting material destruction, is broadly confirmed. The use of Qiams, whose warheads are probably heavier than those of the Zulfiqar, raises the question, however, of the level of damage anticipated by Iran in the two target areas. Moreover, there remains a contradiction between the high precision of the strikes and the relatively low level of damage observed. In this sense, the strike demonstrated a certain vulnerability to the United States and its allies, albeit more limited than the high accuracy of the missiles might suggest.

The analysis of the images allows the following conclusions:

The message carried by the strike is threefold: it is at once a symbolic punishment against the armed systems responsible for elimination of Soleimani; a demonstration of precision aimed at highlighting the vulnerability of the American regional deployment in the face of decisive action by Iran; and finally an illustration of Iran's ability to reach its enemies in their strategic depth. This operation has sent a very clear signal to all the Gulf States.

Looking to the future, several elements should be kept in mind.

At the level of the arsenal itself, the control of conventional strike capabilities will provide Iran with strong arguments to defend the existence of its ballistic forces: it will indeed be increasingly difficult to assert that the development of these systems is carried out only with a view to obtaining a delivery system for a weapon of mass destruction. Beyond Iran, on the other hand, the strike implicitly legitimizes the rationale for ballistic proliferation by illustrating its military, political and strategic usefulness, particularly vis-à-vis the United States.

In terms of a regional strategy of influence or strategic intimidation, the satisfactory performance of the missiles suggests that they could be used more systematically, either in direct support of Iranian military operations or in a more strictly coercive manner. The military-political dimension of the strike is also significant, demonstrating the potential vulnerability of regional powers that might be tempted to participate in a coalition against Iran. The role of the arsenal in Iran's deterrence strategy is therefore likely to become more visible and systematic.

Finally, in the framework of its asymmetrical strategy, this operation reinforces Iran's status as a regional power as well as its ideological claim of embodying 'true Islamic resistance' against Western forces. The strikes may have fulfilled the role of a 'reinsurance' mission vis-à-vis its regional proxies, demonstrating the credibility of an Iranian guarantee to assist them in the event of an attack. 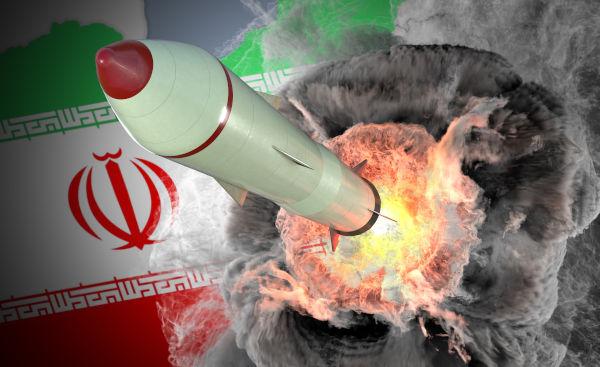 Iranian operations against el-Asad and Erbil bases: what does the imagery show? -- Part Two