This text discusses what has led to Sweden and Finland applying for NATO membership in 2022.

In 1813 Sweden joined the Napoleonic War. Sweden wanted to contribute to the fall of Napoleon in order to gain other geopolitical and military advantages. In 1809, Sweden had lost Finland to Russia, and wanted to increase the Swedish territory. Sweden’s participation in the Napoleonic War lasted until 1814. Denmark, which ruled over Norway, had fought on Napoleon’s side. Sweden attacked Denmark in 1813, and forced Norway into a union with Sweden in 1814. Since then, Sweden has as a state not been in war. Norway decided to free themselves from the union in 1905. There were forces in the Swedish government and military that wanted to attack Norway, but this never happened.

The Social Democrats was the ruling party in Sweden from 1933 to 1977. In this period, the security and foreign policy was based on Sweden being “non-aligned, in order to be able to stay neutral in war”. This formulation became a very strong position during World War II (WWII), and even more so during the Cold War. You could say that it caught a almost religious status with the Social Democrats. Overall three (Liberals, Farmers Party and the Conservatives) of the four other parties in the Parliament supported this principle. The fifth party, the Communists, was excluded from parliamentary processes and decisions concerning defence and security policy up until some time in the 90s since they were accused of collaborating with Soviet (which has later been proven to be true).

Russia defeated Sweden in a war in 1809, and Sweden had to give up Finland, which had been a part of Sweden since the 12th century. The Finns were granted certain freedoms by

Russia, and maintained a rather independent economy vis-à-vis Russia. Russia did this since they did not want to dampen the much more dynamic Finnish economy. In the years preceding WWI, the Russians started to put more pressure on Finland, and also persecute groups that resisted the Russian control of Finland.

With Russia’s limited success in WWI, and the Russian revolution in 1917, Finland managed to break free and became an independent state in 1917. A brutal civil war broke out in 1917 between the Whites (pro-Finnish nationalists, supported by Germany and (to a lesser extent, Sweden) and the Reds (pro-Russian communists, supported by the Bolsheviks). The whites came out victorious on May 15, 1918.

So now, Finland was for the first time an independent state. As the Soviet Union grew stronger and stronger in the years between the world wars, and with the apparent threat of the Soviet Union wanting to reconquer Finland – Finland had to make sure that they did not upset its Eastern neighbour too much.

In WWII, the Soviet Union attacked Finland in 1939. Soviet had foreseen a fast and easy victory. However, they got stuck in the Finnish vast forests during harsh winter, and the Finnish guerrilla-like military operations caused immense damage to the Soviet troops. Finland also took sides with Germany. The Soviets never succeeded in conquering Finland, but in a 1940 peace treaty Finland had to concede territories in the southeast. Finland parted from the German Wehrmacht in 1944. As we know, Germany lost the War, and Soviet was on the winning side. The Soviets dictated a peace agreement with Finland in 1948. This was formulated as a “Friendship, Collaboration and Reciprocal Support Treaty”. The effect of the treaty was that Finland had to act cautiously and respectfully towards Soviet in a somewhat subservient way all through the Cold War.

So, Sweden and Finland had two neutral but different security positions during the Cold War. Sweden however had highly strategic and highly classified collaboration with the US starting from the 50s. Sweden received advanced surveillance systems as well as military aircraft technology. Sweden in return supplied strategic intelligence to the US, and from a US standpoint was a strategically important military force if Soviet wanted to move westwards. This classified US-Sweden collaboration did not become known to the Swedish public until the 90s.

The Swedish loyalty to the “non-alignment in order to be able to remain neutral in war”stance was more and more questioned. In 1992, the stance was changed to Sweden simply being non-aligned. Sweden and Finland became EU members in 1995. The EU did at that time not at all have a military strength. As the security and military ambitions of the EU gradually strengthened, one could question if Sweden and Finland were still non-aligned. There was however no apparent threat in Europe after the end of the Cold War. The two nations also participated in several West-oriented coalitions in peacekeeping missions. Sweden more so. Sweden transformed its military doctrine in the late 90s into prioritizing contributing to peacekeeping operations. With falling defence budgets and increasing costs for missions abroad, considerable downsizing in regiments, homeland defence and defence materiel were decided in the 90s and continued until around 2011. Finland did however much more sustain its Cold War defence structure and resilience, and has done so until today.

With Russia’s aggressions in Georgia 2008 and Ukraine 2014, the assessment of Russia’s hostility started to change. In recent years, there has also been a much more aggressive rhetoric from Kremlin. Putin has lamented the fall of the Soviet Union as being the largest geopolitical tragedy of the 20th century, and has more and more advocated, recently demanded, that Russia must have its privileged interest sphere where smaller nations will have to abide to the security ambitions of Russia. As a consequence of this, the Swedish parliament in 2020 decided upon a hike in defence spending until 2025 from around 1.1 % to 1.5 % of GDP – this after a long period of a low defence budget approaching 1.0 %.

In late 2021 and early 2022, especially UK and US intelligence warned for Russia preparing for war, and that Ukraine was the likely victim. Most Western politicians could not envision that Russia would actually perform such an act. On February 24, it happened. Russia invaded Ukraine with massive force. I will however not describe in this text what has occurred as the war has progressed, and is progressing. For Sweden and Finland, this war nearby was a wake-up call with the volume of an artillery bombardment.

The Swedish defence minister in the social democratled government in December 2021 stated, in a quite agitated way, that Sweden would never as long as he was defence minister abandon its sacred non-alignment and absolutely not even consider joining NATO. In the first weeks after February 24, this rigid rhetoric slowly weakened. The prime minister Magdalena Andersson in the beginning said that the non-alignment had proved to be successful since Sweden had stayed out of war. One could then argue that the membership in NATO had served its members well. In Finland, the assessment of the security situations was much more dynamic. Finland’s political rhetoric soon showed signs of a NATO membership direction. Swedish and Finnish politicians had many meetings, and the general accord is that there was a dependence in both nations joining NATO, and applying for membership at the same time.

During this period of nearing NATO, the Swedish Parliament (with all political parties supporting it) on March 16 presented a revised defence spending plan, which pointed to reaching 2 % somewhere close to the year 2030. On the same day, the Prime minister Magdalena Andersson announced that a special security policy report would be presented in May. This report was written with participation from all eight political parties in Parliament, thereby a text with profound political support. The report was presented on May 13. The report serves as a reformulation of Sweden’s security policy in the light of Russia’s invasion of Ukraine and the debate whether Sweden should apply for NATO membership. The report did not explicitly state that Sweden should apply for NATO membership, but strongly pointed in this direction, and stated that military collaboration within the EU is insufficient and does not guarantee mutual military commitments between partners as through Article 5 in NATO.

The NATO debate intensified in Sweden and Finland in March and April, with Finland showing much clearer signs of aiming to apply for membership. There was also intensive travelling by Swedish and Finnish prime ministers and other ministers to influential NATO members, and also visits in the opposite direction to Sweden and Finland. Finland announced that it will apply for NATO membership on May 15, and Sweden on May 16. They both applied on May 18.

At this time, the road to NATO appeared to be clear. Around this time Turkey (or Türkiye as they now want to be known as) entered the process. They stated they do not support Sweden and Finland joining NATO – and especially not Sweden. This since in Erdogan’s view, Sweden is supporting groups and people that by Turkey are seen as terrorists. It especially concerns individuals connected to Kurdish groups like PKK, YPG and PYD, and also from the Gülen movement. Erdogan demands that Sweden must cease to support YPG and PYD, to extradite individuals named by Turkey and also to stop Sweden’s ban on arms export to Turkey. Presently, intensive diplomatic discussions are ongoing, and as I write this (May 3), the outcome is unclear. Some high-ranking political officers I have talked to are certain that Russia has convinced Turkey to put pressure on Sweden.

Turkey has previously repeatedly used its NATO membership in order to forward Turkish interests. For example, in 2001, Turkey vetoed EU use of NATO military resources since Turkey could not participate in EU decision processes concerning defence and crisis management. In 2009, it vetoed Cyprus from taking part in talks concerning mutual military activities between EU and NATO. In 2009, Turkey threatened to use its veto against the candidature of the Danish candidate Anders Fogh Rasmussen since he had “on several occasions betrayed the Muslim world”. In 2019, Turkey blocked the NATO defence plan for Poland and the Baltic nations based on similar arguments as towards Sweden and Finland. Thus, Turkey has a track record of blackmailing NATO processes and development in order to further Turkish interests.

So where will this end? There is a limit to what Sweden can accept in concessions in order to accommodate the Turkish resistance. I do not think that Sweden will extradite individuals. There is presently an ongoing, sensitive debate whether

Sweden will lift its veto against arms export to Turkey. Finland appears to able to look forward to a more comfortable ride towards NATO. Unless Sweden and Finland act like Nordic musketeers and refuse to accept any other outcome than both nations being accepted as NATO members. And NATO’s fundamental principle is as musketeers – one for all, all for one. 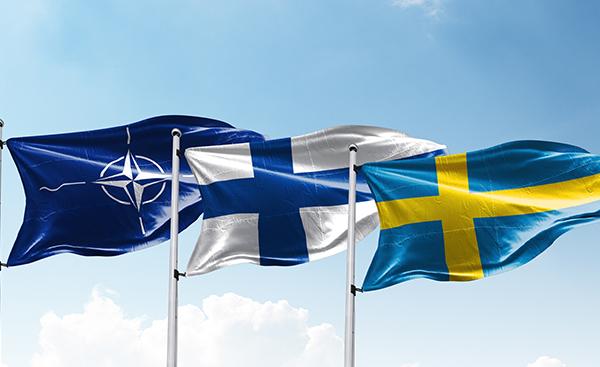 Sweden and Finland steering towards NATO - absent anchorage in Ankara