Ambassador Junichi IHARA has been serving as Ambassador Extraordinary and Plenipotentiary of Japan to France since December 2019. Previously, he served as Ambassador Extraordinary and Plenipotentiary and Permanent Representative of Japan to the International Organizations in Geneva since November 2015. He served as Chair of the WTO General Council from March 2018 until February 2019. Ambassador Ihara joined the Ministry of Foreign Affairs of Japan in 1979 and his past positions include: Director of WTO Division (Economic Affairs Bureau), Consul-General of Japan in Los Angeles, Director General of North American Affairs Bureau, Director-General of Asian and Oceanian Affairs Bureau. 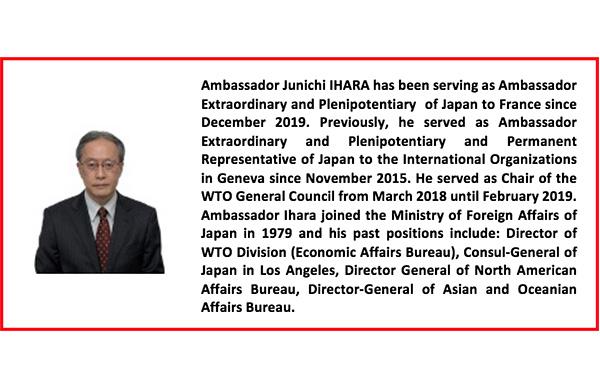 Relations between Japan and France, an exceptional partnership