Japan and the European Union (EU) have much in common. In terms of “power”, they both stress the value-based and “normative” dimension as one of the basics of their influence and legitimacy on the global scene. To both, the economic aspect is another important component of that power, much more than military capabilities.

In terms of hard military power, Japan has constraints and reservations, and is much more in agreement with the constant reassurance given by the United States regarding its involvement in Japan’s security and regional stability. This is also true for the European Union and many member states. Both feel far more comfortable, for good reasons, with continuity.

To make the situation more complex on the EU’s side, one must add 27 member states with different priorities regarding the Asia-Pacific, the Indo-Pacific, and China. France published its defense and security of the Indo-Pacific strategy in 2019, citing China a dozen times. Germany did publish its own Indo-Pacific strategy in 2020. It emphasized the necessity to develop a closer partnership with Japan, but also clearly stated in that document that “no country should be forced to choose between two sides as in the time of the Cold war”.Policy Guidelines for the Indo-Pacific, Germany-Eu-Asia Shaping the 21st Century Together, https://www.auswaertiges-amt.de/blob/2380514/f9784f7e3b3fa1bd7c5446d274a4169e/200901-indo-pazifik-leitlinien--1--data.pdf

However, Japan and the EU do share an ambiguity regarding China. It is not by chance that while the EU agreed to sign an investment agreement, the CAI (Comprehensive Agreement on Investments), in the last days of 2020, despite reservations expressed by the newly elected Biden team, and not a few criticisms on the part of Japan’s media and experts, Japan itself did accept in October of the same year to become part of the Regional Comprehensive Economic Partnership (RCEP) that China could also brandish as a strategic win against the United States.

Japan-EU relations have changed a lot in recent years, and cover new fields. The signature in 2018 of two agreements, the Economic partnership agreement (EPA) and the Strategic partnership agreement (SPA), and the EU-Japan agreement on sustainable connectivity and quality infrastructures in 2019, were important turning points in EU-Japan relations.In 2019, the EU published a new connectivity strategy, stressing sustainability and respect for social, financial, and environmental norms. In 2018, EU ambassadors had made public a report critical of the Chinese model of BRI (Belt and Road Initiative). Quality infrastructures are also fundamental to Japan’s posture.

This remarkable evolution developed from the Guidelines on the EU’s Foreign and Security Policy in East Asia first published in 2012.Council of the European Union, Guidelines: the European Union’s Foreign and Security Policy in East Asia, https://www.consilium.europa.eu/ueDocs/cms_Data/docs/pressdata/en/misc/97842.pdf In 2019, the EU issued a strategic paper mentioning China as a “systemic rival”, not closing the door to dialogue and cooperation on global issues like climate change; yet, this appeared as a significant change of tone.

When one looks into these documents, of course, China’s increasing importance as the main factor in terms of stability and security in Asia and beyond is the major point to observe and it echoes preoccupations in East Asia and Japan.

These documents have a broad orientation: they defend a “rule-based international order”. They support the “development and the consolidation of democracy, the rule of law and respect for human rights and individual freedoms”. Another important point is an invitation to diversify partnerships in Asia beyond China, both at the economic and strategic levels. In other words, a departure from an exclusively China- and economy-focused European Union Asia policy.

As a result, in the new guidelines, Japan is mentioned as an “important partner sharing values” and also a major investor in the region. The EU supports a strategic dialogue with Japan on East Asia also to nourish the EU’s own transatlantic dialogue on foreign and security challenges from East Asia. In other words, the EU recognizes Japan’s role as a major partner in the triangular relations involving the United States, the major security partner to both – Asia and Europe.

The contents of the new EU-Japan agreements

The acceleration of the negotiations initiated in 2011, and their ultimate achievement in 2018, are related to an increased urgency, both in Japan and in the EU, to develop a stronger partnership and political cooperation for two main reasons. The first one is the People's Republic of China’s role, increasingly assertive since Xi Jinping came to power as Secretary General of the Chinese Communist Party in 2012. Suffice to keep in mind that every year since 2012, Xi Jinping repeatedly reminds the PLA to be “war ready”. Even if the discourse is geared to internal politics, it demonstrates China’s leadership’s dangerous willingness to use the threat to use force as a legitimate foreign policy tool.

The second factor was, of course, the Trump administration, which increased the determination of both Japan and the EU to coordinate better and support multilateralism, based on shared values opposed to populism and nationalism.

Common perspectives and some limits.

There are common perspectives that favour closer relations beyond the economy between Japan and the EU. This is the case despite the geographical distance and the fact that neither the EU for Japan, nor, of course, Japan for the EU, can play any consequential role in tackling the hard security threats they face respectively.One could argue that at the operational level, there are the anti-piracy joint exercises in the Gulf of Aden as well as complementarity in Africa, where Japan’s quality development contribution supports France’s and European member states’ counter-terrorism military engagement.  The Strategic partnership agreement, presents a long list of global issues (40) for the EU and Japan to work on. However, no precise operational contents have yet been defined at the EU/Japan level.Axel Berkofsky, “Moving Beyond Rhetoric: the EU-Japan Strategic Partnership Agreement”, Issues and Policy Briefs, April 2020.

Beyond that, a major limitation to a deepening of EU-Japan strategic cooperation, despite a lot of goodwill expressed on both, sides is related to perceptions and the unbalanced character of Japan-US-Europe’s triangular relation.

Despite sharing the same preoccupations regarding China’s disrupting role, for Europe as well as for Japan, the US choice of strategic and security priorities can be an issue. If the focus shifts to the European/Middle East theatres, it provokes at least potential worries in Japan regarding the future engagement of the United States in East Asia. In the same way, for Europe, the United States’ focusing on East Asia is often perceived as disengagement. For example, the pivot to Asia under the Obama administration was interpreted in Europe, particularly in France, in relation with the lack of engagement and defense of red lines in Syria.

Also, the incentive for security dialogue between Japan and Europe is stronger when the United States is perceived by both as a source of uncertainties rather than reassurance. This is not by chance that the strategic partnership between the EU and Japan was signed in 2018, in the context of the Trump presidency.

Of course, circumstances are different, and the perception of the PRC’s negative role at a global level is much stronger today than it was in 2012. When he visited Japan for a 2+2 meeting in March 2021, Secretary of State Anthony Blinken did declare that the “US-Japan Alliance is the cornerstone of peace, security and prosperity not only for the two countries but for the region and indeed the world”.

This constitutes a solid basis for ongoing strategic partnership and dialogue between the EU and Japan. At the same time, the urgency of hard security issues in the Asia-Pacific, such as the situation around the Senkaku or in the Taiwan strait, can only play in favor of a refocus of Japan’s strategic thinking towards “great powers”, meaning the United States of course, as the security purveyor, but also China as both a source of trouble and a source of growth for the Japanese economy.

This balancing act between China and the United States, between economic and security interests, is something that Japan shares with Europe. However, it may not play in favor of strengthening the EU/Japan side of the triangle under a new US administration that does not assume anymore the role of the “villain” attributed by both Tokyo and Brussels to the Trump administration.

In Europe, particularly in France, a more cooperative US administration is not considered a bad thing, but this does not translate automatically into complete alignment of interests and objectives. The suspicion will always be that US interests come first, hence the reflection on the concept of strategic autonomy.

In Japan, that kind of questioning raises suspicions, or interrogations, regarding the “loyalty” of Europe and of some European states towards the paramount US ally. It also explains why, despite Brexit and despite the SPA with the EU, the United Kingdom is still perceived by many in Japan as the most important strategic partner, due to its close and traditional relationship with the United States. In other words, falling back into the “Anglo-Saxon” exclusive club, is also a way for Japan to fall back into its traditional comfort zone – a comfort zone that the unpredictability of the Trump presidency had challenged.

All these innuendos and limitations, as well as the ambiguities in the United States regarding expectations for the EU and EU member states, could weigh on the future strategic relations between the EU and Japan. However, on January 25, 2021, Foreign Minister Motegi did participate for the first time to a EU foreign ministers meeting, and the EU and Japan share the same values, as well as respect for international law and commitment to the liberal world order. This should help foster a strategic dialogue between the European Union and Japan. 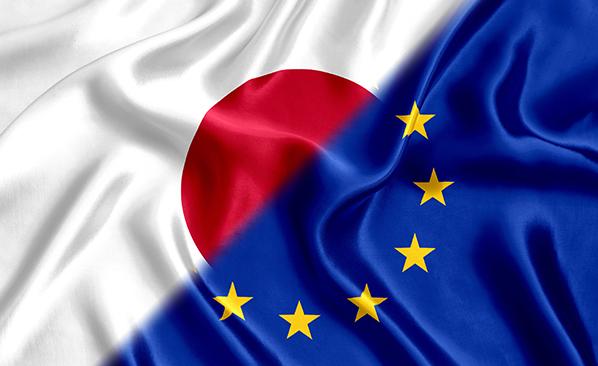 Japan and the EU: shared interests and cooperation