The recent NATO summit enabled Allies to show unity and a certain belief in the transatlantic bond at a time when, after four years of an openly NATO-sceptic US administration, the cohesion and relevance of the Alliance had been shaken. This must be welcomed; after all, the nature of the evolving security environment is a plea for more multilateral security institutions rather than less.

This said, while NATO embarks in a process of revising its Strategic Concept, it is confronted with a series of challenges in relation to its core tasks that make its positioning uneasy, and that thus question its long-term relevance.

First, NATO’s moving away from crisis management and new embrace of collective defence in the context of a resurgent Russia deprive the organization from a range of operational activities that enabled it to maintain expertise, practice interoperability, develop partnerships, show its role and presence. Crisis management could be contested, and the deterrence agenda does imply operational activities, as illustrated by the reassurance measures in the Eastern flank; yet today’s dynamic is more one of planning and deterring than one of projecting power. This can be seen positively, but it also affects the organization’s vitality and visibility.

Second, many of NATO’s new activities lie at the periphery of what the Alliance is fundamentally about, and therefore question its comparative advantage in these domains. From cyber to hybrid and disinformation, from climate change to pandemics, from resilience-building to critical infrastructure protection and even technological innovation, NATO is asked to develop expertise and run programmes in areas for which it has no undisputed legitimacy or operational added-value when compared with states, the European Union or in some cases private sector entities. Those activities show NATO’s adaptive capacity, and as such are inherent to the organization’s quest for congruence with the threats out there, but they also carry the risk of dilution of NATO’s core task and legitimacy.

Third, the recent Summit indicated that China was the inevitable looming challenge that potentially would give NATO its new raison d’être. Yet, what the Alliance can bring to tackle the China conundrum is not obvious if one considers the systemic, economic, technological, value-driven nature of the problem. Furthermore consensus among allies on making China the new threat is far from given, as quite a few are concerned that doing so would put NATO’s cohesion at great risks, not least because of the shift away from issues that matter to Europe more than to the US.

So what can NATO do? At least three types of action are in order. First, it does matter for a military organization like NATO to retain a military edge so that it remains a credible deterrent and, if need be, a robust fighter. This sounds obvious when reading the Brussels Summit final communiqué yet it also poses limitations to how much NATO can or should broaden its agenda. In Europe, in the Arctic, and maybe in parts of the MENA region, NATO is to remain the transatlantic forum for deterrence and defence; that is no small task and requires profound evolutions so as to respond to the transformation of warfare. Second, NATO must accept that it will not be a first responder on quite a few issues and that it must, in those areas, develop operational partnerships with a wide range of actors, public and private, so that it can effectively share the burden. The importance of the NATO-EU relationship in this respect cannot be overstated. Third, not being a first responder does not mean that NATO cannot play a useful role. On many of the peripheral areas that NATO increasingly covers, it can legitimately develop an expertise, set standards, raise awareness, conduct exercises, coordinate and harmonize national policies, and provide support to the Allies (and partners) that lack capacities. By agreeing on this NATO will remain the transatlantic alliance embedded in a security network of like-minded states and institutions, best-equipped to tackle tomorrow’s challenges, whether these are called Russia, terrorism, cyber, China, or a mix of the above. 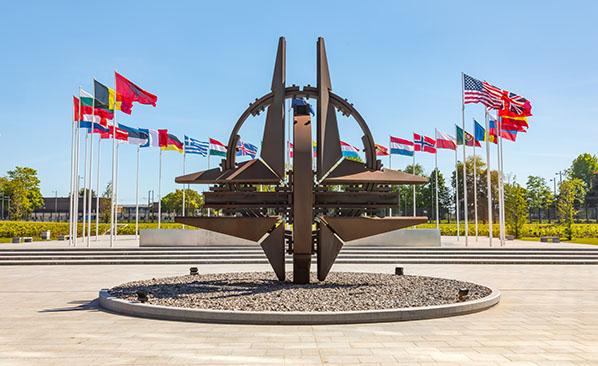