The past year will be remembered as a turning point for NATO in its approach to the China question. In their June 2021 communiqué, NATO leaders mentioned China very directly: China’s “growing influence and international policies can present challenges that we need to address together as an alliance” (paragraph 3). The statement raised eyebrows in Asia –including in Tokyo, Seoul and of course Beijing- where governments are not used to deal with an alliance which greatest responsibility, as it self-defined, is “to protect and defend (our) territories and (our) populations against attack, and will address all threats and challenges which affect Euro-Atlantic security”. Could the People’s Republic of China be such a threat?

On paragraph 55 of the communiqué, China is mentioned again. According to NATO leaders China is presenting challenges “by rapidly expanding its nuclear arsenal and being opaque in implementing its military modernization”. In addition, China “is also cooperating militarily with Russia, including through participation in Russian exercises in the Euro-Atlantic area”. Unlike China, Russia – an on-going concern within NATO – is mentioned very frequently in the communiqué.

Insiders say that NATO has in fact been watching various aspects of Chinese policies for several years. After all, it does make sense for the organization’s policy planners and analysts to monitor Chinese strategic, diplomatic and military activities which have been rising at various degrees across all the five continents. China now runs the world’s largest diplomatic service and is a permanent member of the United Nations Security Council (UNSC) – not to mention an impressive presence in the senior management of many UN-led agencies. It has established new international organizations such as the Asian Infrastructure Investment Bank (AIIB) and the Silk Road Fund. Economically, its “go global” policy originally set in the 1990s, was upgraded in the last decade under the banner of President Xi Jinping’s “Belt and Road Initiative”, a network of regional infrastructure projects which has continued to expand and includes enhanced policy coordination across the Asian continent, financial integration, trade and digital connectivity. China’s efforts to implement this initiative (often successfully) has had an important effect on the region’s economic architecture – and in turn has strategic implications for NATO.

As a direct concern to several major powers part of the Alliance, China’s defense budget ranks second after the United States ($209 billion or 1.7 percent of China’s GDP), following a steady increase since the early 1990s. In 2021, the People’s Liberation Army (PLA) expenses rose by 6.8 percent. The Alliance calls on China to “uphold its international commitments and to act responsibly in the international system, including in the space, cyber, and maritime domains, in keeping with its role as a major power”.

At the London NATO leaders’ summit back in 2019, China got one mention as HQ staff had been asked to look at technological competition in particular. But last year confirmed a new step in NATO’s approach, which now looks at China across three directions: first, as a nation that is trying to set standard setting in technology. While China remains behind the more established players, China is also focusing on strategic sectors. For example, companies like Huawei Technologies or ZTE had invested massively in 5G standards for at least a decade before its launch, and are now looking at the next generation of telecommunication standardsCissy Zhou, “Standard-bearer: China races U.S. and Europe to set tech rules”, Nikkei Asia, December 21, 2021.. According to a survey, China already accounts for 40 percent of patents for sixth generation communication network applications, expected to be rolled out commercially as soon as 2030. New technologies yet to be standardized -- drones, lithium batteries, data security, artificial intelligence (AI) are also key targets of the Chinese leadership. A new report by the EU Chamber of Commerce in Chinahttp://www.europeanchamber.com.cn/en/publications-standardisation-report, entitled The Shape of Things to Come: The Race to Control Technical Standardisation, revealed the stakes of Chinese policy of standardization and identifies technical standard setting as a battleground on which states are fighting to gain dominance in strategic technologies, such as 5G, AI and new electric vehicles. The report is based on extensive interviews with corporate members of the EU chamber. Soon or later, the new standardization process will affect international bidding processes in many parts of the world.

As part of its Belt and Road Initiative, China signed 98 bilateral and multilateral agreements on standardization with 55 countries and international organizations (many of them signatories of the BRI). What impact does it have on the global security situation, on the Alliance’s members and the organization’s strategy? This will soon become a key question for NATO, which has not yet taken a stand on BRI. Only a few NATO members have signed MoUs on the BRI.

Second, NATO looks at how China is projecting its power in countries very close geographically to the alliance, such as in the Black Sea region or the Indo-Pacific. Respect of international norms, especially freedom of navigation principles, are essential to NATO. Eurasia is home to partnership countries some of which share core values with members of the Alliance, and not necessarily with China (nor Russia), hence the need for an enhanced dialogue on norms and the rule of law.

Third, China has raised its influence in countries belonging to NATO. For example, naval or energy infrastructures are related to the national sovereignty of many European NATO countries which have ceded some state assets to China following the 2008 financial crisis. The harbor of Piraeus in Greece (which is now run by China Ocean Shipping Group) or the National Grid of Portugal (partly owned by China Three Gorges, another state-owned corporation) both belong to this category. Reactions to China’s growing presence has produced mixed results. In many cases, peer pressure has led countries to limit new foreign investments in sensitive areasErik Brattberg, Philippe Le Corre, Paul Stonski, Thomas de Waal, “China’s Influence in Southeastern, Central, and Eastern Europe: Vulnerabilities and Resilience in Four Countries”, Carnegie Endowment for International Peace, October 13, 2021.. Member-states such as Romania and Bulgaria, for instance, have favored their relationships to NATO (and the EU) including a military presence rather than Chinese investments.

Despite strong views, and sometimes strong pressures on fellow members when it comes to China, it is unlikely that the United States will call upon NATO to intervene in the Indo-Pacific region. President Emmanuel Macron of France, in particular, insisted that the relationship with China is “broader than the military topic. It’s economic, strategic, about values and technological.” He insisted that the Alliance should not “scatter our efforts and not to have biases in the relationship to China”. Discrepancies remain on the approach towards China within the Alliance, and within the Atlantic community as a whole.

Still, NATO will discuss its new Strategic Concept 2030 at a summit next summer, which will outline the alliance’s purpose for the following 10 years. The current version, adopted in 2010, does not even mention China. Still, in a rapidly changing geopolitical environment, NATO needs to tackle all critical issues and the organization’s strategy cannot afford to avoid new challenges tied to Beijing’s global ambitions. NATO states that China’s ambition and assertive behavior present “systemic challenges to the rules-based international order and to several areas relevant to the Alliance” according to the June 2021 communiqué. Facing an ever ambitious and assertive China, it is clear that NATO needs to shape its analysis and assessment by next Spring, on time for the 2030 strategy. 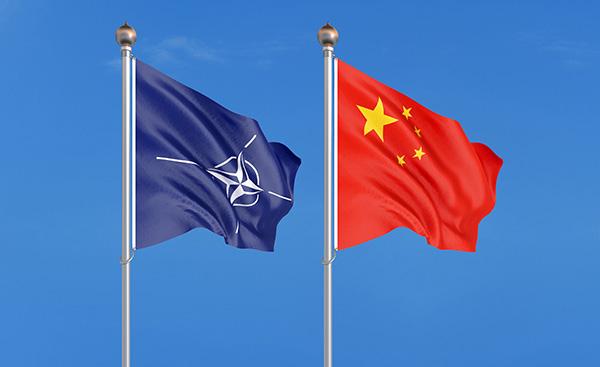